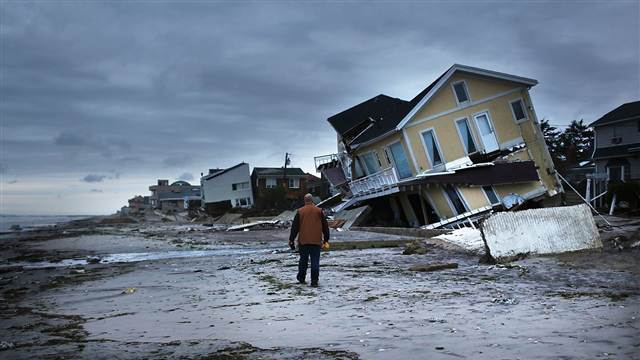 ” The most remarkable feature of this historical moment on Earth is not that we are on the way to destroying the world- we’ve actually been on the way for quite a while. It is that we are beginning to wake up, as from a millennia-long sleep, to a whole new relationship to our world to ourselves and each other.” Joanna Macy

The phrase “A crisis is a terrible thing to waste” was coined by Paul Romer, American economist, entrepreneur and activist speaking about the rapidly rising education levels in other countries versus the United States. When it comes to the environment, there are no shortage of crisises these days not to waste, and particularly that of the seas that are also rapidly rising.

As paradoxical as saying anything good about the calamitous storm that wreaked such devastation and loss on the East Coast seems, Hurricane Sandy could not have come at a more fortuitous time, as it cut through the pervasive denial reflected in both presidential candidates’ silence on climate change during the debates. It brought this alarming issue front and center, as a crisis that needs to be addressed now. It is no longer possible to relegate it to a problem for future generations. It’s real, it’s here, and in the face of millions of Americans. The timing of the gigantic storm’s occurrence, a week before the presidential elections, inspired Mayor Bloomberg of New York City, to give his endorsement to President Obama, as the candidate most likely to provide the necessary leadership to take action on this central issue of our time.

This morning I listened to a gorgeous interview with Joanna Macy, an 81 year old Buddhist scholar, environmental activist, philosopher of ecology and translator of the German poet, Rainer Maria Rilke. The interview was featured on one of my favorite radio programs “On Being” with Krista Tippett, which airs in the Boston area on NPR on Sunday mornings at 6 AM. It was titled “A Wild Love for the World.” What I adored about what Macy had to say, was how natural it would be to become terribly overwhelmed, discouraged and shut down in the face of the magnitude of the issues that we are confronting at the moment. Macy believes, instead, in the healing power of experiencing our grief about all of it, for ourselves and the planet. In the interview this morning she said,

“Not be afraid of it because that grief, if you are afraid of it and pave it over, clamp down, you shut down. And the kind of apathy and closed-down denial, our difficulty in looking at what we’re doing to our world stems not from callous indifference or ignorance so much as it stems from fear of pain. That was a big learning for me as I was organizing around nuclear power and around at the time of Three Mile Island catastrophe and around Chernobyl.

Then as I saw it, it relates to everything. It relates to what’s in our food and it relates to the clear-cuts of our forests. It relates to the contamination of our rivers and oceans. So that became actually perhaps the most pivotal point in, I don’t know, the landscape of my life, that dance with despair, to see how we are called to not run from the discomfort and not run from the grief or the feelings of outrage or even fear and that, if we can be fearless, to be with our pain, it turns. It doesn’t stay static. It only doesn’t change if we refuse to look at it, but when we look at it, when we take it in our hands, when we can just be with it and keep breathing, then it turns. It turns to reveal its other face, and the other face of our pain for the world is our love for the world, our absolutely inseparable connectedness with all life.”

Macy read from Rilke’s last poem “Sonnet to Orpheus” which describes his choice to be with the darkness rather than to hide from it, and how that resonates with our current situation on our planet.

“Let This Darkness Be a Bell Tower”

Quiet friend who has come so far,
feel how your breathing makes more space around you.
Let this darkness be a bell tower
and you the bell. As you ring,

what batters you becomes your strength.
Move back and forth into the change.
What is it like, such intensity of pain?
If the drink is bitter, turn yourself to wine.

In this uncontainable night,
be the mystery at the crossroads of your senses,
the meaning discovered there.

And if the world has ceased to hear you,
say to the silent earth: I flow.
To the rushing water, speak: I am.

Here is an inspiring short video of Joanna Macy speaking about “Uncertainty”:

Joanna Macy on Uncertainty from Chris Landry on Vimeo.