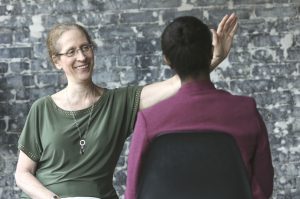 This past weekend I learned how to implement an efficient, effective and creative technique for treating trauma, chronic pain, stress and a variety of psychiatric conditions such as phobias, OCD and depression called Accelerated Resolution Therapy, which goes by the acronym ART. The woman in the picture is Laney Rosenzweig. the originator and founder of this method. It is being used successfully in the military to treat PTSD, but its applications are much broader than for treating only trauma, including some surprising successes  for conditions like fibromyalgia.

That being said, I learned about ART from a fellow holistic adult and child psychiatrist, who was so thrilled with the results that she was getting in her practice, that I was inspired to take the training myself. Tomorrow I will try it for the first time with one of my patients. I am particularly intrigued about the potential of ART to help patients with mysterious chronic illnesses like fibromyalgia.

Below is a two part video of a woman who suffered with fibromyalgia for 20 years which resolved with one session of ART. Critics of ART say that the claims are “too good to be true”. The proof will be in the pudding. I will report back to you with my results.