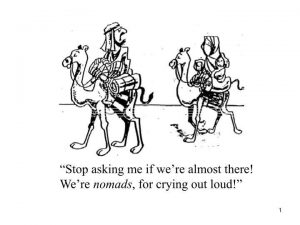 When I am feeling down and alone,  I often feel soothed by listening to dharma talks by Jack Kornfield, one of the key teachers to introduce Buddhist mindfulness practice to the West. He moves me, often makes me laugh, and always gives me valuable perspective on the human condition. Listening to him, I invariably feel like my suffering is placed into a vaster context. It feels much less personal, creating a feeling of relief, peace and spaciousness.

He  reminds me that we are all constantly in process, and that we cannot arrive, because we are nomads, just passing through. He emphasizes that all of the ordinary human experiences and emotions; pain and illness, grief and loss, disappointment and betrayal, separation and loneliness, fear of aging and death, are all just part of the nomad’s journey, and not a sign of failure or personal weakness. There is no perfecting ourselves or conducting ourselves in such a way that we will be immune. And that is just the way it is. Many years ago I had one of those little square newsprint calendars consisting of a Buddhist quote a day. I saved one of the 365 by Shunryu Suzuki, that is my office to this day. It reads “Each of you is perfect the way you are … and you can use a little improvement.”

But I also heard him say “the question is not the future of humanity, but the presence of eternity.” He was drawing attention to the Beauty and Mystery that is ever present in our daily lives, if we only are able to take it in. Much of our suffering arises out of this lack of sensibility to the magic that is constantly available to us.

This morning, I was transfixed listening to him quote a poem by Ellen Bass, “Gate 22”, published in her book Mules of Love. Bass transforms an ordinary moment in an airport, into an occasion for witnessing the transcendent.

At Gate C22 in the Portland airport
a man in a broad-band leather hat kissed
a woman arriving from Orange County.
They kissed and kissed and kissed. Long after
the other passengers clicked the handles of their carry-ons
and wheeled briskly toward short-term parking,
the couple stood there, arms wrapped around each other
like she’d just staggered off the boat at Ellis Island,
like she’d been released from ICU, snapped
out of a coma, survived bone cancer, made it down
from Annapurna in only the clothes she was wearing.
Neither of them was young. His beard was gray.
She carried a few extra pounds you could imagine
her saying she had to lose. But they kissed lavish
kisses like the ocean in the early morning,
the way it gathers and swells, sucking
each rock under, swallowing it
again and again. We were all watching —
passengers waiting for the delayed flight
to San Jose, the stewardesses, the pilots,
the aproned woman icing Cinnabons, the man selling
sunglasses. We couldn’t look away. We could
taste the kisses crushed in our mouths.
But the best part was his face. When he drew back
and looked at her, his smile soft with wonder, almost
as though he were a mother still open from giving birth,
as your mother must have looked at you, no matter
what happened after — if she beat you or left you or
you’re lonely now — you once lay there, the vernix
not yet wiped off, and someone gazed at you
as if you were the first sunrise seen from the Earth.
The whole wing of the airport hushed,
all of us trying to slip into that woman’s middle-
aged body,
her plaid Bermuda shorts, sleeveless blouse, glasses,
little gold hoop earrings, tilting our heads up.
Here is video of Ellen Bass reading her poem: