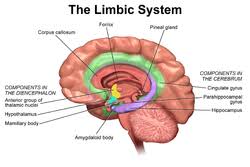 It is not uncommon for individuals with severe chronic health conditions, such as Mold Toxicity, Lyme Disease, Fibromyalgia and Multiple Chemical Sensitivity to develop a post-traumatic syndrome.  They literally experience damage to the area of the brain called the limbic system, the deep structure in the brain responsible for feeling and reacting. The structures which compose the limbic system are the amygdala, the hippocampus, the hypothalamus and the cingulate cortex. Individuals with histories of adverse childhood events, such as neglect and abuse, are more vulnerable to the development of this distressing condition.

In a healthy individual, the limbic system functions to discern the level of threat in the environment and to mobilize a proportional response. When the limbic system becomes damaged, it exaggerates the level of threat and overreacts with an involuntary survival response in order to protect itself. Individuals with dysregulated disorganized limbic systems can experience catastrophic physical and emotional reactions to mild stimuli, including light, sounds, fragrances, touch, and electromagnetic frequencies. They can become solely preoccupied with how to survive and are prone to extreme states of negativity, depression, hopelessness and fear.  Intrusive negative thoughts are common. When their experience is invalidated and no one has answers about  how to help, they can even become suicidal.  This is all exacerbated by the fact that their cognitive function is often compromised, including memory problems and brain fog. Physical symptoms are also common with impaired detoxification capacity resulting in symptoms of inflammation with chronic pain and sensitivity, and digestive issues with impaired absorption of nutrients and lowered energy levels.

It is easy to imagine that this profound dysregulation of the limbic system completely destroys their quality of life. It can result in extreme social isolation, as well as an inability to work, travel or interact with others. Some even become homeless because every environment feels intolerably toxic and threatening. Such dramatic and seemingly irrational behavior can result in rejection by family and friends, as it is misunderstood as volitional, manipulative and controlling, or crazy. It is rarely appreciated that they are literally suffering from brain damage.

This is not a condition that typically responds to conventional talk therapy but can be effectively treated with a novel approach called  The Gupta Program was created by Ashok Gupta. The Gupta Program is an intensive experiential program that integrates components of cognitive-behavioral therapy, mindfulness-based cognitive restructuring, emotional restructuring therapy, neural linguistic programming, incremental training (a form of neural shaping), and behavior modification therapy to rewire neural circuits in the limbic system which calms the hyperactive stress response. It teaches practical tools which harness the neuroplasticity of the brain, allowing individuals to heal and to be restored to health, well-being, and happiness.

I recommend The Gupta Program to many of my patients who are traumatized by their experience of living with chronic illness. It pairs well with ART, an eye movement therapy for addressing trauma.

Here is an interview with Ashok Gupta about limbic system retraining for anxiety and depression: