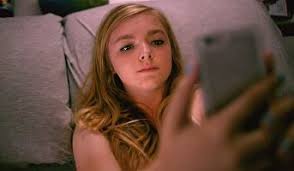 The film “Eighth Grade” is an intimate honest portrayal of a very shy awkward girl’s eighth grade year in a contemporary suburban school. It is a new and moving universal coming of age story by Bo Burnham, an immensely gifted 27 year old YouTube comedian and musician. The film skillfully represents the centrality and intensity of a girl’s relationship with electronic devices and social media in the context of struggling to navigate the developmental tasks of adolescence.

Kayla, played by Elsie Fisher, is a motherless girl, whose most sustaining emotional relationship is with her cell phone, lap top and imagination. Her father is loving and well-meaning, but she, for the most part, is intent on pushing him away as she tries to separate from him and her little girl self.

Kayla’s loneliness, longing and anxiety are palpable throughout the film. Her habitual withdrawal into her darkened bedroom with only Snapchat and Instagram for companionship only fuels her angst. Kayla tries to master a variety of social situations through the creation of a series of self-help videos. She films herself talking into the camera, dispensing sage advice that applies directly to the challenging social and existential situations which she endures.

One of the most distressing scenes was the portrayal of a live shooter drill, with the kids obliged to crouch under their desks for shelter. It is breathtaking to acknowledge that in today’s world, that this is actually necessary. This is one of the many reasons children today are beside themselves with anxiety. The mainstream medical response is often to prescribe psychiatric medications.

The following information is the most accurate and documented data available on psychiatric drug usage in the United States. The information is from IQVia (formerly IMS Health), a company that provides information, services and technology for the healthcare industry. It is the largest vendor of U.S. physician prescribing data. The following data was taken from the IQVia Total Patient Tracker Database for Year 2017, extracted April 2018. The number of kids seventeen and under on anti-depressants was 2,100,315 and on anti-anxiety medications  1,445,509.

The film “Eighth Grade” provides insight into and understanding of what kids today are up against. A great deal of anxiety just comes naturally with the territory of adolescence, separating and individuating from parents, navigating changing bodies and sexuality and exploring issues of identity, but other sources of stress such as the self consciousness generated by social media and the regularity of school shootings are new. In addition, though not mentioned in the movie, is the deleterious effects of the toxicity of the environment and the over prescription of pharmaceuticals including antibiotics and hormones. All of these factors have an undermining effect on immunity with consequences for mental health.

Though at moments it was excruciating to witness Kayla’s struggles; her ardent desire to belong and to be considered cool, the rejections she sustained, and the confusion of navigating sexuality as a young teen, it was nevertheless, an uplifting, tender and very funny movie. There are mean girls but also kind ones, predatory exploitative boys and others who are earnest and sweet. Her father clearly adores her and tries his best. It’s a complicated movie. It brought home yet again, how intrinsically challenging it is to be human, to have a body and to figure out how to grow up, let alone to contend with all the new unique pressures and self consciousness generated by social media.

Technology and the on-line world creates psychiatric situations that I never encountered previously. I recently interviewed a 15 year old who was suicidal because she had broken up with a boy who she had never actually met in person. Their only connection had been on-line. The reason for the break up was because he was cheating on her virtually, with another girl he had never met. There was obviously much more to it, but this was her version of why she felt suicidal.

It’s hard to underestimate the impact that technology and social media is having on all of us, but its particularly distressing to contemplate its impact on impressionable, vulnerable, developing children.

I highly recommend this very contemporary movie to you and would welcome hearing your thoughts and feelings about it.

This is a wonderful piece in the New Yorker magazine about Bo Burnham, the writer and director of “Eighth Grade “. This is his first feature length film. I anticipate witnessing his creative development. His artistic sensibility is so highly attuned and original.

Here is a trailer that captures the essence.