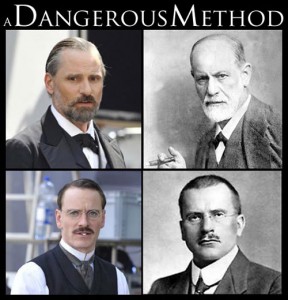 This week I saw the film “A Dangerous Method” about the relationship between two icons of psychoanalysis, Freud and Jung. Both men were geniuses and both very flawed as human beings. Freud’s intellectual approach to his colleagues was “my way or the highway”,  and Jung had sex with several of his patients.  I did not like the casting in the movie, particularly of Freud, who I imagined very differently than the actor portrayed him.

But I found the film very rich and worthwhile on multiple levels, and could write pages about all the thoughts it stimulated in me about the origins of  “the talking cure”, dreams and free association, the role of early childhood trauma in psychopathology and symptom formation, power dynamics between mentor and mentee, analyst and patient, Jews in Europe during the first decades of  the 20th century, gender roles during that time, to name just a few. In this post I will focus on one of the central differences the film highlighted between Freud and Jung, which is an ongoing conflict for me in my relationship with my profession.

Freud believed that one of the primary aims of psychoanalysis was to turn neurotic misery into normal human unhappiness. He was very much focused on this earthly dimension, and his characterization of spirituality was that it was a form of infantile  “wish fulfillment”. In other words, we believe in a power greater than ourselves because we are desperately in need of that illusion in order to feel more secure. Most of my psychoanalytic colleagues are resolutely agnostic or atheists. Though I believe that psychoanalytic insights have so much to offer us in terms of understanding human nature, the lack of resonance and even condescension towards matters relating to the Divine strikes me as very limited and limiting.

Jung’s ideas about human potential and fulfilling one’s life’s purpose, in a larger spiritual sense, were rejected by Freud. Freud was understandably very fearful about the scientific community’s judgment about his work, and he believed that inclusion of Jung’s more esoteric perspective would provide his enemies with additional fuel to discredit him. His anti-Semitic academic and medical colleagues were already outraged by his brilliant ground breaking ideas about the unconscious, and particularly the role that childhood sexuality plays in our lives.

Freud’s legacy in this regard has been a theory and treatment focused on psychopathology,  i.e. studying mental illness and suffering, rather than on developing knowledge about happiness, and the related states of  joy, thriving, fulfillment, engagement, and flow. Recently a whole body of work called Positive Psychology has been developed. The founder of this movement, Dr. Martin Seligman, of the University of Pennsylvania, wrote a book called Learned Optimism, based upon his research regarding habitual thought patterns which foster happiness or learned helplessness.

Central to this theory is that there are habits of mind that we can consciously cultivate that make us measurably happier. One of the most effective is practicing gratitude. Research has consistently demonstrated that subjects who wrote down 3 things a day that they felt grateful for, experienced a greater sense of well being: a happier more positive frame of mind, than the control group who did not engage in this practice. Should you wish to try this yourself, here is a link to a page that describes how to keep a gratitude journal.

Sometimes it requires concerted conscious effort to feel grateful. Who among us is a stranger to suffering? No one I know. For myself, at the moment, I am struggling with digestive issues and very uncomfortable symptoms related to menopause, and one of my oldest closest friends is dying of pancreatic cancer, to name just a few painful challenges. Last year I stumbled and broke my foot and had to wear an air cast for several months. I adore walking and could not, and that represented a real hardship for me. I was thrilled when I got the cast off and could walk once more, but that delight eventually receded and I started again taking walking for granted.

That brings me to another attitude that one can practice in order to foster happiness. There is a saying, “One door closes another door opens.” This is a habit of mind that seeks to see the potential blessings that are embedded in difficult experiences. This is not to be confused with being a Pollyanna or in denial, but rather is an adaptive appreciation of the gifts that are potentially available in a situation of loss or pain, if we are capable of acknowledging and cultivating them. In the case of my broken foot and my inability to walk, I became more involved in an incredible yoga studio in my neighborhood called Down Under . My friend’s cancer has resulted in me feeling closer to her than ever, which is very precious to me. I am hoping that the journey to heal my own digestive and menopausal symptoms will translate into valuable information for my patients.

I am grateful to you, dear readers, for giving me this platform to write to you about what is on my mind. I love communicating and getting messages from you and having the opportunity to reach more people than I am able to meet in person. Here is a very moving YouTube video, called ” A Good Day” featuring Brother David, a Viennese born Benedictine monk, whose work I find inspiring. It is about cultivating gratitude and wonder in our everyday life.

Thanks to Carolyn Romano and her wonderful radio show “Living with Purpose” for introducing me to Brother David.