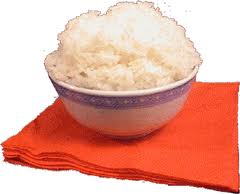 I love rice. All varieties, white and brown, short and long grain, nutty basmati and fragrant jasmine.  I adore the smell of it cooking. I love spicy Thai and Indian curries over mounds of rice, and even eating rice with just butter and salt. It’s the ultimate comfort food for me. Others have similar feelings about potatoes. Paul Jaminet’s categorization of rice as a “safe starch”, was immediately a very seductive and appealing notion to my ears.

I have been following the “safe starch” controversy (see link for a wonderful summary of the debate at Jimmy Moore’s LLVLC ) with interest, and have felt both surprised and not surprised, by the sustained and heated controversy it has generated. I have received several e-mails from readers asking me about my take on this subject. My surprise about the duration and passion of the controversy has to do with how clear it is to me, that for individuals with insulin resistance, carbohydrate intolerance and metabolic syndrome, it does not make sense. My lack of surprise about it, is related to the power of wishes. At least for some of us.

Freud was very interested in wishes. They feature prominently in dreams, where the dreamer dreams something that she/he unconsciously wishes or fears is true. It also happens in waking life, when through an exercise of the imagination, we believe what serves or comforts us, or resolves a conflict. For me, the wish that rice would be a safe starch is not unconscious. But unfortunately for me, and for other GAPS patients, categorizing rice as a safe starch, would fulfill a lovely desire, but would ignore reality. Ignoring reality generally has a painful cost.

One peculiar and puzzling aspect of this controversy, is that Paul Jaminet asserts that these safe starches are protective against the ravages of dysbiosis. He contends that safe starches facilitate mucous production in the bowel, thereby protecting the wall of the intestine. Without consuming safe starches, the gut wall is vulnerable to damage by pathogenic microflora. This specifically contradicts the theory of dysbiosis according to Dr. Natasha Campbell-McBride of the GAPS healing protocol. Dr. Campbell-McBride, whose recommendations are in the tradition of the Specific Carbohydrate Diet, teaches that starches which are metabolized to disaccharides, such as all grains, sugar, and starchy vegetables, specifically feed the pathogenic microflora. These pathogens overwhelm the beneficial protective microflora, and thereby compromise the integrity of the bowel wall. This is the root cause of many disease states, as microflora, toxins, and food particles, which should remain within the bowel, diffuse out into the body causing inflammation and infection in the body and the brain. Both Jaminet and Campbell-McBride are addressing precisely the same issue, but are asserting the opposite. Hmmmm.

Though I did not attend the Weston Price Wise Traditions conference in Dallas several weeks ago, I heard that in his lecture, Paul Jaminet referred to GAPS as a ketogenic diet. This is by no means accurate. GAPS is not even really particularly low carb. For those individuals who are not insulin resistant, and who can tolerate it, fruit and honey are a regular part of the diet, though should not exceed 15 % of calories. (Fruit and honey are metabolized to monosaccharides and do not feed the pathogenic microflora, and are thus permitted. Hence “specific carbohydrate” diet).

In her clinic in England, Dr. Campbell-McBride has seen thousands of patients with psychiatric, auto-immune and digestive issues, who she has successfully treated with the GAPS healing protocol, which specifically excludes all grains, sugar and starchy vegetables. In a communication to me regarding the “safe starch” issue, she wrote that she has not seen one GAPS patient who needed starch in any form, if the program is conducted properly.

There is an interesting blog post about the GAPS healing protocol last month from the  Nourishing Gourmet, which is followed by a series of comments that are even more interesting. Some individuals reported feeling a lack of energy after having initially felt well on GAPS. My guess is that this is likely due to blood sugar issues, as well as die-off from the pathogenic microflora, as they are starved of their usual nutrients, i.e. grains, sugar and starchy vegetables.

Upon initiation of the diet, if an individual habitually has consumed a diet high in starchy carbohydrates, there can be a period of metabolic adjustment, when she/he switches to a diet consisting of GAPS permissible foods. In those cases, Dr. Campbell-McBride recommends creating a mixture of equal parts butter or coconut oil and honey, and consuming a spoonful every 30 minutes or so to stabilize blood sugar, until an individual adjusts to the new diet. For those who have been on the diet for an extended period of time, and equate their fatigue with a need for more carbohydrate in their diet, there are GAPS legal foods which are high in carbohydrate, such as winter squash and carrots. I do not personally understand why grains or other non-permitted starchy vegetables such as potatoes or yams are necessary for energy, or for mucous production, for that matter. There are multiple sources of permitted carbohydrates on the the GAPS diet.

For those individuals who are not suffering from insulin resistance or a metabolic disorder, who do not have digestive, psychiatric or auto-immune issues, there seems to be no reason to leave these starches out of the diet. They are delicious, add variety and do not have the damaging effect that gluten has on so many individuals.

The GAPS protocol is not intended as a life long dietary prescription. It is meant to heal psychiatric, digestive and auto-immune conditions. After healing has occurred, an individual may return to eating properly prepared grains and starchy tubers. We all know that one size does not fit all, and that each individual needs to take any health protocol, and adjust it to her/his needs and monitor the effect. It would be wonderful if some omniscient doctor could tell us exactly what we need to do, but we all need to take responsibility for tailoring any dietary recommendations and adapting them to our own unique physiology.

One woman wrote to me that she followed the GAPS diet with much improvement, but her vision deteriorated. When she began to eat rice, her vision improved. Who knows what this is about? If I were her, I would definitely eat rice. As Dr Natasha writes, “One man’s meat is another man’s poison.” Despite the advice of experts, we all need to ultimately find our own way. I always liked this saying, “Go, pilgrim, there is no path, the path is made by walking.” This is true for much about living, but I think particularly so when it comes to diet.