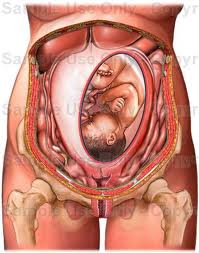 Since training to become a GAPS practitioner, I have become increasingly fascinated with the role the microflora in our gut plays in maintaining health and creating disease states. An average adult carries 2 kg of bacteria in the gut. There are 10 times more microbial cells in the body than human cells. This means that we are ten percent human cells and 90 percent microbial, and there are an estimated 100 times more microbial genes than human genes in the human body. The vast majority of these microorganisms are located in our gut.

New research studying gut microflora in pregnancy has revealed that there is a marked alteration in the composition of the types of microflora over the course of a pregnancy.  The species of microflora that were present in the third trimester are associated with metabolic syndrome in non pregnant individuals. Metabolic syndrome is a group of risk factors that occur together and increase the risk for coronary artery disease, stroke, and type 2 diabetes. Remarkably these changes could be beneficial in pregnant women.

When gut microbiota from women in their third trimester were transferred to germ free mice, the mice developed symptoms of metabolic syndrome, including weight gain, disordered glucose metabolism and inflammation. Scientists believe that in pregnancy, these changes help transform the mother’s metabolism to support the growth of the fetus. Weight gain and abnormal glucose metabolism often occur in pregnancy, but the underlying causes were not clear.

In a recent study the microbial composition of stool samples from 91 women, most of whom were normal weight prior to pregnancy, were analyzed in their first and then third trimester. Investigators measured health markers during prenatal check ups, including insulin levels, insulin resistance and circulating glucose. The caloric intake of the women did not change, but from the first to the third trimester the women put on fat, had higher levels of circulating glucose, leptin, insulin, cholesterol and increased insulin resistance. From the first to the third trimester the women lost diversity in the gut microbiome. In addition, there were 29 taxonomic groupings that reliably discriminated between the first and third trimester.

In order to test the effect of these changes, researchers transferred stool from women in their third trimester to germ free mice, which induced inflammation, reduced insulin sensitivity and excess weight gain. Samples from first trimester women had little effect. The investigators concluded that “In the context of pregnancy, these changes in the mother are healthy, because they promote energy storage in fat tissue and help support the fetus. Outside of pregnancy, these types of changes can lead to development of type 2 diabetes and other health problems.”

It is a commonly observed phenomena that a tendency to gain weight is often familial. Given the relationship between gut flora and metabolic syndrome, it seems likely that one important cause of familial obesity may have to do with the fact that we inherit our gut microflora from our parents, primarily our mother. In utero the baby’s gut is sterile, but when the baby passes through the birth canal, she swallows the mother’s microflora, which comes from the mother’s and father’s intestinal tracts. This is how a baby inherits the microbiome of the parents. If the parents have a tendency to insulin resistance caused by their gut flora, then their child will also have these tendencies. I can imagine that one day obesity will not be treated with bariatric surgery, but with faecal transplant.