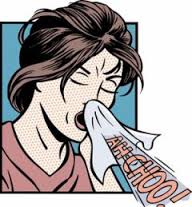 Many people who typically do not suffer from seasonal allergies are now experiencing symptoms of hay fever for the first time in their lives. Never having had this  condition in the past, when their nose is running, their throat is scratchy, and they are congested, coughing and sneezing, they do not attribute it to pollen levels, but rather imagine that they are suffering from a cold. These seasonal allergic symptoms are also mediated by histamine, which in excess of the body’s capacity to metabolize it, can cause a variety of medical and psychiatric symptoms. Please see my previous posts about histamine intolerance for background.

Pollen counts have sky rocketed in recent years due to rising temperatures and increasing carbon dioxide levels. Dr. Richard Weber, the president of the American College of Allergy, Asthma and Immunology stated,  “We are experiencing longer allergy seasons, earlier onset, and there is just more pollen in the air,”

“Weber cites a series of studies conducted on three continents to illustrate how the changing climate is affecting human allergies. In Great Britain, for example, researchers have identified 385 plant species that are flowering earlier than ever, advancing by nearly a week over the last decade.  In the United States, ragweed pollen season has been extended 13 to 27 days; and short ragweed pollen has shown increases in both biomass and pollen production of between 61 and 90 percent.”

An estimated 40 million Americans suffer from some form of seasonal allergies.”Steadily increasing temperatures may only make things worse. “A year ago, we saw pollen counts of certain trees that were about three times higher than what we normally would see in years past,” said Weber. “It was awful. Plants that ordinarily were pollinating in April, by the beginning of March, they were going gangbusters.”

For individuals suffering from chronic histamine intolerance, seasonal environmental allergens can aggravate their condition. The conventional medical approach is to prescribe anti-histamines such as Claratin for hay fever. Anti-histamine medications lose effectiveness over time, can cause either drowsiness or insomnia, and dry out the sinuses. By contrast certain foods and supplements are naturally antihistaminic and anti-inflammatory without any side effects.

Regularly eating raw local honey made from the pollen specifically in your area can enhance natural immunity and reduce histamine levels.

Fresh ginger is a natural anti-histamine and can be made into a tea, which is also soothing to the digestive system.

The bright yellow orange spice tumeric, one of the ingredients in the curry spice mixture, is one of the most potent natural anti-inflammatory substances available. Some recommend taking half a teaspoon a day mixed with food.

Natural supplements purported to reduce histamine level and inflammation are:

Vitamin C: There seems to be quite a bit of controversy regarding dosage. I take 1000 twice mg a day.