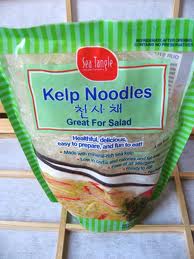 I recently discovered a very low carb low calorie noodle made from the sea vegetable kelp, manufactured by a company called Sea Tangle. It comes in a green plastic bag and was located in the Asian section of Whole Foods. (it can be purchased more cheaply on-line) The bag proclaims this product to be both healthful and delicious. The first assertion is dubious, but the second is really true. These noodles, which look like glass vermicelli, taste just like rice noodles, that is if you cook them long enough. I made them once cooking them until they were soft and once just heating them through, and the experience was very different. When they were cooked longer until soft, they tasted like normal noodles. When cooked only briefly, they tasted like a crunchy vegetable and not noodle like at all.

My fifteen year old daughter has a discriminating palate and finds many of the unusual foods I eat disgusting.  When she sat down at the computer from which I had neglected to log out and saw what I had been researching, she put two and two together and realized that the yummy left over Pad Thai she had just consumed was made from long cooked kelp noodles. She had not noticed anything unusual about the Pad Thai. And believe me, she would have.

These noodles have a lot of potential. Noodles made from rice or wheat are loaded with carbohydrate and calories, which can be problematic for those of us with insulin resistance and a tendency to gain weight. These noodles are almost carb free and calorie free, and it’s remarkable how good they taste. They are completely different than Japanese Shiritaki noodles, which are also translucent, low calorie and low carb. Shiritaki noodles are made from konjac yam and water, taste a little bit fishy and have an odd springy texture. Kelp noodles taste much more like conventional rice or wheat noodles.

Here is what it says on the package:

Kelp Noodles are a sea vegetable in the form of an easy to eat noodle. Made only of kelp (a sea vegetable), sodium alginate (sodium salt extracted from the brown seaweed) and water, Kelp Noodles are fat-free, gluten free and very low in carbohydrates and calories. Their noodle form and neutral taste allow for a variety of uses including salads, stir-fries, hot broths and casseroles while their healthful content provides a rich source of trace minerals including iodine, which kelp is well known for. Their unique texture completes the package, making Kelp noodles a one-of-a kind healthful and tasty alternative to pasta and rice noodles. Best of all, no cooking is required, Just rinse and add the noodles to any dish and they are ready to eat!

Kelp noodles are not a GAPS or Paleo food. They qualify as a processed food. Here is a description of alginates:

“Alginates are extracted from brown seaweed and are available in sodium, ammonium and potassium derivatives. They are soluble in both hot and cold water, and can thicken and bind.  In the presence of calcium and an acid some alginates can form resilient gels.

The chemical compound sodium alginate is the sodium salt of alginic acid. Its form as a gum, when extracted from the cell walls of brown seaweed (particularly kelp grown in the cold water regions of Ireland, Scotland, North and South America, New Zealand, Australia, and South Africa) is used by the food industry to increase viscosity and as an emulsifier. It is also used in indigestion tablets. Sodium alginate has no discernable flavor.

Sodium alginate works as a cold gelling agent that needs no heat to gel. It gels in the presence of calcium compounds. Most commonly used with calcium chloride to make caviar and spheres. It dilutes while cold with strong agitation. Heat is not needed to produce spherification. Sodium alginate can also be used to produce foams.”

There was a Michelin 3 Star restaurant (three star rating means: “Exceptional cuisine, worth a special journey” (“Une des meilleures tables, vaut le voyage”) on the Costa Brava in Catalonia, Spain called elBulli. It was only open 6 months a year and considered for several years to be the best restaurant in the world. The chef of elBulli, Ferran Adria prepared extremely creative and exotic dishes using alginates to create caviar like spheres and colored foams. It was described as “the most imaginative generator of haute cuisine on the planet.” It closed in July of 2011 and is scheduled to reopen in 2014.

Even though Kelp noodles are a processed food, for those who must adhere to a low carb diet, I believe that it is safe to eat them occasionally. They provide needed variety which makes it easier to stick to a low carb regimen. Digestively they agreed with me, and I felt very satisfied after I ate them. Sodium alginate is touted to have appetite suppressant effects.