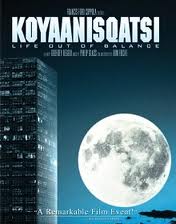 Koyaanisisqatsi is a Hopi Indian word that is translated as “life of moral corruption and turmoil” or ” a state of life that calls for another way of living”.

It is the title of a cult movie directed by Godfrey Reggio from the early 80’s, that made a big impression on me when I was still young. It’s a film without words using time lapse photography, which juxtaposes images of the Southwest desert and New York City, set to an evocative and haunting soundtrack by Phillip Glass. The theme of the movie is humanity’s increasing disconnection from the natural world.

The word Koyaanisqatsi springs to my mind frequently these days when I think about the frightening impact of global warming on the planet, the oil spill in the Gulf of Mexico in 2010, the nuclear meltdown in Fukushima in 2011, and most recently when I heard about the proliferation of the Burmese python from Southeast Asia in the Florida Everglades, which is decimating the mammalian population.

I first heard about the python invasion on NPR’s On Point. I was fascinated and horrified by this ecological nightmare. Giant Burmese pythons, an invasive species, set loose by owners in the Florida Everglades when they grew too large to be safely kept as house pets, in addition to those that were accidentally released into the wild during hurricanes, have multiplied like wildfire. Many mammals and birds are totally disappearing; Raccoon populations down 99 percent. Opossum, 98 percent. Deer, 94 percent, Bobcat  87%, fox and alligator, all devoured by the Burmese python, which cannot be suppressed, let alone eradicated. Giant snakes such as these can survive eating only once a year.

Based on fossil evidence, it has been 15-16 million years since there were giant snakes native to the Florida Everglades, which were large enough to eat a small mammal. Now within 20 years, due to human impact on the environment, these snakes which can grown up to 17 feet and weigh up to 150 pounds, number in the hundreds of thousands. They have become the apex predator, able to eat even an alligator. There is real concern that they will spread north to significant portions of the South, which also has a suitable habitat for them. Scientists have been shocked to discover that they are good swimmers, able to tolerate salt water and are threatening the Florida Keys.

We are so clueless about the destructive impact that our thoughtless actions have upon the environment. It’s Koyaanisqatsi. I am actually surprised that I do not hear more about these worrisome events from my patients. I believe this is because these phenomena are so overwhelming and so anxiety provoking, that they are held at arms length, and the focus is on more manageable topics like conflicts around love, work and diet.

The brilliant quantum physicist, David Bohm (1917-1992), wrote about the insensitivity to “incoherence”, which is I think another word for Koyaanisqatsi, that is fostered in us in order to stabilize society. He wrote in 1989:

“I think our whole society tries to stabilize itself by starting out to destroy sensitivity to incoherence starting with very young children. If people could see the vast incoherence that is going on in society they would be disturbed and they would feel the need to do something. If you’re not sensitive to it you don’t feel disturned and you don’t feel you need to do anything.
I remember an instance, a daughter was telling her mother, “this school is terrible, the teacher is terrible, very inconsistent, doing all sorts of crazy things,” and so on. Finally the mother was saying, “You’d better stop this–in this house the teacher is always right.” Now she understood that the teacher was wrong obviously, but the message was, it was no use. Even the message may have been right in some sense, but still it illustrates that the predicament is that in order to avoid this sort of trouble, starting with very young children, we are trained to become insensitive to incoherence. If there is incoherence in our own behavior, we thereby also become insensitive to it.”

Here is a video of an fight between a Giant Burmese Python and an alligator in the Florida Everglades, made only possible by Koyaanisqatsi: