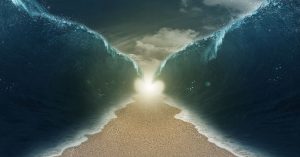 This evening the eight day Jewish festival of Passover begins, which is celebrated with a ritual meal, the Seder, that symbolically recounts the dramatic story of the liberation of Jewish slaves in ancient Egypt. It’s a complex archetypal tale, full of magic , mystery and miracles, and laden with contemporary relevance.

Once upon a time in ancient Egypt, the Jews were powerless slaves, forced to perform back-breaking labor and subject to unbearable cruelty. Moses, their leader, went to the Pharoah to deliver a message from God commanding him to free the Jewish slaves. The arrogant all-powerful Pharoah refused declaring, “Why should I give up this great free labor source provided by these inferior non-Egyptians? What is this nonsense about a message from God? I am God.” God showed him otherwise. In order to persuade him to free the slaves, God visited ten plagues, one after another upon the Egyptians. The water turned to blood. There was an infestation of frogs, then lice, and then flies. The livestock died from pestilence. People developed boils on their skin. Hail and then locusts rained from the sky. Darkness enveloped the earth and finally, the Angel of Death killed all firstborn Egyptian children. At last the Pharoah relented and let the slaves go. The Jews fled in haste. When they came to edge of the Red Sea, the waters parted allowing them to pass through to the far shore. Meanwhile, the Pharoah changed his mind and sent his army to re-capture the slaves. The army followed in hot pursuit along the path that had opened for the Jews between the waves, but the waters rushed back together and all the army drowned.

So why am I telling this story now besides the fact that tonight the first Seder of Passover will be celebrated?

We are in the midst of a time of plague, a pandemic, Covid-19, that thus far has sickened and killed huge numbers of people around the world. And this is only the beginning. “Build a wall” does nothing to stop a plague. Though the virus disproportionately infects and kills more vulnerable populations, it does not spare royalty or heads of state. One of the virus’s many messages to us is that we are all inextricably connected not just by the world wide web, but by the web of life. We are all One.

Though Covid-19 is the plague dominating the news headlines at the moment, it is certainly not the only plague being visited upon us.

In January bush fires ravaged Australia costing the lives of a billion animals. Wildfires have also destroyed vast areas of California over the past several years and resulting in large losses of life.

A plague of locusts is devastating East Africa. This corollary is literal, as locusts were actually one of the ten plagues. Locust plagues are a recurrent phenomenon, but the scale of this infestation is unlike any in recent memory due to conditions created by climate change. The locusts are threatening the food supply of tens of millions of people in one of the poorest regions of the world.

Human activity is causing the biosphere to collapse and is resulting in a Sixth Mass Extinction of animal and plant species. There are actions that could be taken which would mitigate the catastrophe, but thus far, we are unwilling to freely choose to make the required sacrifices. Pharoah believed that he was God, and that limits did not apply to him. We have the same mentality. Our enslavement and exploitation of the resources of the Earth know no limit, and we are bearing the natural consequences of our actions. Though storms are becoming more powerful and destructive, the coral is dying, glaciers are melting and the seas are rising, the response of the American Federal government has been to withdraw from the Paris Climate Accord and to attempt to deregulate emissions standards further.

Covid-19 is a zoonotic virus, meaning that it was originally an animal virus that was transmitted to people. Our encroachment on the wildest most remote places on the planet, in service of economic development, is exposing us to viruses and pathogens from wildlife that are novel to humans, and to which we have no immunity. The Guardian quoted Kate Jones, Chair of Ecology and Biodiversity at The University College of London, who stated that increasingly zoonotic diseases are linked to environmental change and human behavior. The disruption of pristine forests driven by logging, mining, road building through remote places, rapid urbanisation and population growth is bringing people into closer contact with animal species they may never have been near before.

Covid-19 is not just a random biological event. It carries symbolic meaning and is an urgent message about the logical consequences of our arrogance and distorted relationship to the natural world. We do not see ourselves as belonging to the web of Creation, but act as though we are all-powerful Pharoahs and the Earth is our slave. Pharaoh did not live happily ever after.

The Passover story is also about a longing for a change in consciousness, a movement from slavery to freedom. In an effort to reduce the contagion of Covid-19, our freedom has been severely curtailed and strict limits have been imposed upon us. All of our usual activities have been suspended. We are not Gods. We are humans, grounded and vulnerable. May we make use of this time of enforced retreat to listen deeply and to reflect upon what is truly of value. May we learn from is happening to all of us. May it be a catalyst to bring forth a new consciousness that we may live in right relationship with Nature, and enact policies that reflect our care and concern for the health and well being of future generations and of the planet.

In this time of unspeakable suffering and uncertainty, may the Angel of Death pass over your home, and bring you blessings for the holiday.

Here is an experiment: An audio file of me reading this blog post.