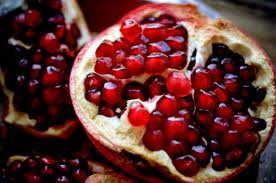 It is September, a season of new beginnings, the initiation of a fresh cycle. We just celebrated Rosh Hashana, the Jewish New Year. The children went back to school, the summer is waning and it’s getting dark earlier. Autumn is at the door. September is a time linked in my mind with the ancient mythic pomegranate, a cross-cultural symbol of fertility and sweetness. It is traditional to eat pomegranates with its many seeds on Rosh Hashana, as a symbol of fruitfulness.

As a child in the 50’s in Pittsburgh, Pennsylvania, we called pomegranates “Indian Apples”. I have always loved them, though they were a challenge to eat. I would extract the juicy crimson seeds individually, staining my fingers, until I learned a brilliant Israeli technique.

This is really amazing: Take a knife and slice the pomegranate in half. Take a heavy spoon, and holding half the pomegranate sliced side down over a large bowl, whack it repeatedly, and all of the gorgeous scarlet seeds will tumble out. Then you just need to remove the few pieces of creamy rind that were dislodged as well, and you have a luscious pile of pomegranate seeds.

The pomegranate is a symbol to me of all of the blessings in my own life. I was very inspired by the sermon that my rabbi,  Wes Gardenswartz, gave on Rosh Hashanah. It is linked in my mind with appreciation and pomegranates. This is my reconstruction of what he said:

The British psychoanalyst Adam Phillips proposed that each of us has the actual life that we live, which is the result of all of the choices we have made and all the circumstances in which we find ourselves. Simultaneously, each of us has a parallel unlived life, one that shadows us with what might have been; the regrets, the opportunities not embraced, the roads not taken. He spoke of the wonderful novelist Richard Russo, who wrote a memoir of his relationship with his mother entitled , “Elsewhere”. Russo’s mother never was happy where she was; she was always longing to be somewhere else.

The rabbi reframed the tasks of daily living that can at times feel onerous, like doing the laundry, as something that he GETS to do, rather than something that he HAS to do. In order to do laundry he has to be able to see to sort the colors, have functioning legs which carry him up and down the stairs, and arms that have the strength to hold the basket. The capacity to do laundry presupposes a great deal of able-bodiedness. I know for myself, I can sometimes feel burdened by having to weed the garden, or having to figure out what to make for dinner for the children, or being obliged to seriously restrict my carbs if I don’t want to gain weight and feel tired. But OMG, what a blessing to still have children under my roof to make dinner for, to have a garden to care for, or to be in such a privileged position that I can choose what to eat.

The rabbi addressed the importance of simultaneously being aware of those aspects of our lives that are still unlived, and striving to manifest those dreams and potentials, while experiencing gratitude for the reality of our lives as they are. Not to be like Richard Russo’s mother who was focused on what was missing. The rabbi noted that none of our lives are perfect; there are those who have wealth but poor health, a meaningful career but trouble with our kids, a good marriage but constant money worries; and yet for all of us, there are so many blessings that we often just take for granted.

Warm wishes to all my readers for a sweet, fruitful and healthy New Year, filled with consciousness of the blessings in our lives, as the numerous as the seeds of the pomegranate.