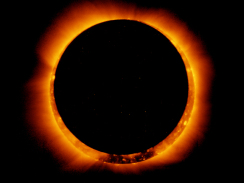 This Spring and Summer we have an opportunity to witness a series of remarkable astronomical events. The beginning of May featured a Super Moon, the largest appearing closest moon of 2012, and this Sunday there will be an annular solar eclipse. In the USA, it will only be visible to those living on the west coast. Annulus is Latin for “little ring”. Near sunset the moon will slip in front of the sun and block out 94% of its light. The sun will appear as a fiery ring behind the moon. Unfortunately we won’t be able to see it on the East Coast, because the sun will have already set by the time the eclipse occurs.  Annular solar eclipses are fairly rare events, requiring the sun, moon and earth to be in a particular alignment. The last one occurred in the United States in 1994.

This eclipse will be visible on a path from northwestern Texas through New Mexico, northeastern Arizona, southern Utah, Nevada, northern California and southwestern Oregon late in the day on May 20. People are organizing viewing parties in sites along the eclipse’s path. One of the best sites to view the eclipse is a tiny town of 300 in Utah, Kanarraville, which is bracing itself for a potential flood of 1000 visitors. Officials are setting up public toilets and parking to accommodate the skywatchers. A winery in Lubbock, Texas is offering blankets and a glass of wine to patrons who wish to view the eclipse, and a ski resort in Southern Utah is advertising a lift ride to the top of the mountain and solar glasses to behold the eclipse for $8, before it sets behind the mountains. Almost every western National Park is hosting a viewing and astronomy program.

As the sun continues on its path, the eclipse will then be visible over the North Pacific, in southern Japan and southern China on the morning of May 21.

Solar eclipses occur when the moon comes between the Earth and the sun. A total solar eclipse is when the moon aligns exactly with the sun and blocks out all of its light. Partial eclipses cover only a portion of the sun’s face. Annular eclipses are similar to total eclipses in that the moon precisely lines up with the sun. But in this eclipse,  the moon is close to its farthest point from Earth in its elliptical orbit around our planet, at the point called apogee, and thus appears too small in the sky to cover the solar disk entirely. As a result, a ring of bright sunlight will still shine around the moon’s circumference.

Viewers must use special filters to safely look at a partial solar eclipse or risk retinal burns, which can damage eye sight and even cause “eclipse blindness.” During an eclipse, the eye’s natural defense against light, pupil constriction, does not occur in the normal way. In the dim light of an eclipse, the pupil remains dilated and thus dangerous light radiation can enter the eye and burn the retina.

Throughout ancient history solar eclipses were often feared and seen as evil omens, presaging war, devastation and an overthrow of the natural order of things. The Greek word for eclipse literally means abandonment, as if the sun is abandoning the Earth. The mythology of diverse cultures portray the solar eclipse as the sun being eaten by various animals or demons. The ancient Chinese believed that eclipses were caused by a dragon trying to swallow the sun. If they knew an eclipse was coming, they would bang gongs and shoot off fireworks to scare it away. In Japan wells were covered to prevent poison from dropping into them from the sky.

But not all myths about eclipses are so negative. In the North American Inuit tradition, there is a belief that during an eclipse, the Sun and Moon temporarily leave their places in the sky and check to see that all is well on Earth.

Since a solar eclipse is essentially a very powerful new moon, i.e. the sun and moon are together in the sky, the astrological meaning is similar to that of an ordinary new moon, only amplified. The new moon correlates with planting a seed, the birth of something, a new beginning. This eclipse will occur in the sign of Gemini, which is associated with knowledge, communication, and adaptation amongst its many meanings. The energy signature of an eclipse lasts for 6 month, so we can anticipate that between now and the winter solstice, that there will be an emphasis on new knowledge, important messages and the need for us to adapt. The specific meaning of an eclipse for an individual can be refined by looking at which portion of the sky Gemini falls in their unique birth chart, and the meaning of that placement.

Eclipses belong to a particular set of cycles called a saros, which repeats every 18 years. This saros started in 984 AD and will end in 2282. This eclipse is thus linked to the eclipse that occurred in May 1994. If you think back to what was going on in your life in May 1994, you can anticipate that a similar sort of energy will prevail during the next 6 months. So for instance, if you had your first child, that was a status change;  you became a mother or father. You could anticipate that there might be a status shift for you in this next period. Or perhaps you met the love of your life, and suddenly things felt very different; you might anticipate that your life would in some way feel transformed in this next 6 months. Or maybe it was an uneventful period. In can be interesting to reflect back to 1994, 1976, 1958, etc.