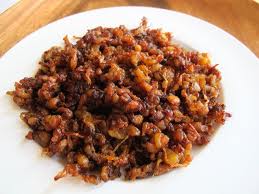 I’d heard about my oldest friend Betsy’s other best friend, Richard, for years before I met him in person last weekend. I traveled from Boston to Durham, NC, and Richard from Kansas, for a party Betsy and her husband Tom were hosting.  Richard is the most skilled cook I ever met; he chops vegetables like a magician. He has actually worked much of his life as a professional chef. All weekend, thanks to Richard, we ate the most wonderful food. My favorite thing that Richard made was a gribenes pate.

Gribenes are a traditional Jewish food made from crispy fried chicken skin and onions. The word gribenes or grieven means “scraps” and is often mentioned in Jewish stories and parables. They are a Kosher version of pork rinds or cracklings, and have actually recently become popular at upscale restaurants. I read that they are the “new bacon”. Unadorned, they make an incredibly delicious snack, but the pate Richard made from them was unforgettable. He served it with slices of raw carrot.

Chicken skins are another nourishing food that have unfortunately been unjustly maligned by the politically correct low fat diet dictocrats. In many households, health conscious but deluded cooks, throw away this most nutritious and tasty part of the chicken. A very common sight is a calorie conscious woman, eschewing the dark meat of the chicken for its high fat content, choosing the lower fat white breast meat.  She then virtuously pulls the skin off and discards it. Little does she realize that the presence of high amounts of collagen protein make chicken skin very beneficial in promoting beautiful human skin. According to traditional Chinese recipes, chicken skin is renowned for creating smooth skin in women. Our poor American woman’s choices regarding her chicken is going to result in her being thin, depressed, and wrinkled to boot.

Here is the recipe for Richard’s gribenes pate:

sea salt and pepper to taste

1. Slice the chicken skin into small strips about 1 inch long.

2. Place the skin and onion in a heavy skillet. Cook for about 20 to 30 minutes over a low heat, stirring occasionally with a wooden spoon, until the fat is melted. As the skin cooks, the fat separates from it, and the skin becomes crispy.

3. Once the fat has mostly melted, turn up the heat to medium-high and continue to cook until the onions and skin are golden brown to black. Sprinkle with kosher salt to taste. Using a slotted spoon, remove the crispy skin and onions from the pan and place them on heavy paper to drain. Reserve the chicken fat in the pan or store in a jar. This fat is called schmaltz in Jewish cuisine. It is a delicious oil for use in cooking other dishes.

5. Using a strong chef’s knife cut the acorn squash in half, lengthwise, from stem to end. Use a spoon to scoop out the seeds and string in the center of each half. Score the insides of each half several times with a sharp knife. Place each half in a baking pan, cut side up. Add about a 1/4 inch of water to the bottom of the baking pan so that the skins don’t burn and the squash doesn’t get dried out.

7. Bake in the oven for 1 hour to 1 hour 15 minutes, until the squash is very soft and the tops are browned. Do not undercook. When finished, remove from oven and let cool a little before scooping squash out of the skin with a spoon.

8. Mix gribenes with baked squash and parsley. Add salt and pepper to taste. If the mixture seems a bit dry, you can add a bit of the reserved oil (shmaltz) from the gribenes to make the mixture more creamy. Serve with slices of carrot.