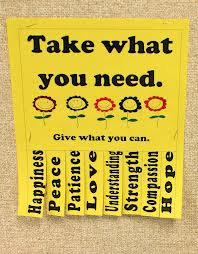 The pomegranate, with its many seeds, is an ancient symbol of fertility. It is often eaten on Rosh Hashana, the Jewish New Year, which we just celebrated. One meaning of the custom is that we wish that our good deeds in the ensuing year will be as plentiful as the seeds of the pomegranate.

On Rosh Hashana the rabbi gave an inspiring sermon. He described those intractable heartbreaking situations which we simply must endure, that cannot be resolved, despite our best efforts or intentions;  a lack of closeness with an impaired parent or sibling, the tragedy of having a child who is in the grip of addiction, a painful medical condition of our own that involves loss of function, the grief over the death of a loved one. The examples are simply endless. We all have them. It’s part of the human condition.

He referenced the Talmudic teaching; that when we can do absolutely nothing to remedy or improve our own situation, that it is recommended that we do what we can to help someone else. Then we can have the pleasure and satisfaction of making a difference, if not in our own life, in the life of another. Positive psychology research supports the finding that performing acts of kindness promotes our own happiness.

I was describing this sermon to one of the coaches at my gym, a warm young man named Everett Hoffman. He responded that it reminded him of a Buddhist parable. A novice monk came to his teacher and said, “I am discouraged. What should I do?” The teacher replied, “Encourage others.”

TACA (Talking About Curing Autism) is a truly remarkable organization whose goal is the provision of “education, support, and information to parents, to help their children diagnosed with autism be the very best they can be, with the hope of recovery.” TACA parents mentor other parents. I had the privilege of giving a talk about GAPS to this lively group a few weeks ago, and was so impressed with their energy, dedication, and knowledge. They are a wonderful resource for families struggling with autism, and everyone should know about them. They charge no fee for their services. Given the alarming rise in the incidence of autism, their mission is especially valuable.

“TACA began with a small handful of families in a living room in 2000. Today, we serve well over 31,000 families around the United States. From a grassroots beginning in Southern California, TACA expanded nationwide and now has a physical presence via our Chapters in 19 states and a virtual presence in the rest of the nation.” The Massachusetts Chapter leader Mary Romaniec, is an energetic woman, passionate about helping others, whose own son was declared recovered from autism by the age of 4 through her efforts. The conventional medical community’s position about autism is that there is no hope for cure, and that the most that can be expected is management of symptoms with pharmaceuticals and behavioral therapies. TACA empowers families by providing education and hope.

Speaking of encouragement and empowerment, I would like to encourage my readers who are struggling with intractable physical and psychiatric symptoms which have not responded to GAPS or SCD, despite scrupulous adherence, to try the Paleo Auto Immune Protocol. I am impressed with the difference it has made both for me and patients in my practice, when we have been able to identify specific foods which trigger anxiety, depression, insomnia, attentional difficulties, as well as many physical symptoms, and have avoided eating them.

I appreciate GAPS underlining the centrality of the role of the digestive system in health and illness and its effect upon brain function.  GAPS contribution to the understanding our immune system and its relationship to the micro biome is brilliant. Its recommendations to eat a nutrient dense diet and to be mindful of the role of detoxification are fundamental. But if an individual continues to eat foods that trigger an auto immune response, be it grains, dairy, eggs, nuts, seeds,  nightshades, or whatever, healing will be delayed, if not significantly undermined. I have only come to fully appreciate this recently.

I refer you to my last blog piece where I also wrote about this. It’s on my mind in a big way. I have been thinking about the differences between GAPS and Paleo AIP. GAPS is not an elimination diet like Paleo AIP. GAPS purports to cure, Paleo AIP, to put an auto immune condition into remission. GAPS does not permit inclusion of starchy tubers, Paleo AIP does. It seems to me with regard to this last difference, that each individual will need to find what works for them, in terms of carbohydrate tolerance. The proof of the pudding is in the eating; how does it make you feel? I recommend close observation of your own responses, as the best guidance. It is much more trustworthy than theory. It’s a great idea to keep a journal, as burdensome as that may seem. It can otherwise be confusing and hard to make the connections between food and symptom.

Its important to get really clear about which foods are the problem, especially because, often its a food to which you are particularly attached. I, for example, love butter. I had a hard time accepting that it was linked with feelings of depression. It was only when I avoided it for a period of time, and then reintroduced it again in the form of garlic butter on salmon, and fell into the most painful funk, that I had to bite the bullet and acknowledge that I must not eat it. I wrote to myself in my journal, “YOU CANNOT EAT DAIRY, IT MAKES YOU DEPRESSED.” I finally got it through my head. There is so much resistance to accepting that foods we love are making us sick.

I recognize that the implementation of the Paleo Auto Immune Protocol is a challenge, but the most restrictive phase is time limited and the potential rewards are so great. It is possible to feel well and to put your auto immune condition into remission. There are so many stories of people with seemingly intractable devastating auto immune disorders who are now essentially symptom free. It’s a New Year, and a great time to try something new, which could eventually make it a REALLY good one. May you enjoy as many blessings in the New Year, as the pomegranate has seeds.