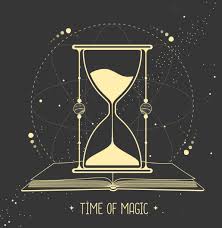 When the Universe wants me to pay attention to something, repeated uncanny synchronicities occur in my life. I feel called to share with you recent experiences in this regard.

I never had been one of those people who worried about my age. Turning 30, 40, 50, or 60 did not phase me, but suddenly as my 65th birthday approached last October, and I would become “Medicare eligible”, I felt both shocked and disoriented that I would soon be turning 65.

A few days before my 65th birthday, I attended a meeting of a book group. Before the formal discussion began, members were socializing with one another and I was chatting with a couple who I did not know well. The conversation went as follows:

He: How is your practice going these days?

He: I guess there must be a lot of really sick people out there.

Me: Well, I don’t really think that’s what it’s about. I think it has more to do with the fact that today many people want something more holistic and spiritual than just taking medications.

He: Oh! So you are like a holistic health coach.

Me: No, I am a psychiatrist, psychoanalyst, and astrologer so I actually have quite a bit more training than a holistic health coach.

He: They probably like to see you because you are old.

I was speechless and that was the end of the conversation.

No one had ever said I was old before. It was notable to me that I did not construe in his characterization of me as “old,” that he was saying that my cachet was due to the fact that I am an experienced mature clinician. Calling me “old” felt aggressively and unmistakably devaluing. Given the context of my preoccupation with turning 65 in a few days, it felt like the Universe had planted him there to give me an explicit opportunity to deal with my own prejudices about aging. Transforming our belief systems in this regard is so important, as it has a profound impact on our capacity to thrive as we age.

There can be no doubt that the modern world is profoundly age-ist and that we are strongly conditioned to have a negative view of aging. From early childhood, we are constantly bombarded with messages that reflect extremely derogatory stereotypes of age that are simply not true.

Our internal narrative in this regard literally impacts longevity. A researcher and professor of psychology and epidemiology at the Yale School of Public Health, Dr. Becca Levy, studied her subjects’ attitudes about aging when they were in late middle age and then followed them longitudinally. Those who characterized older people as weak or dependent died seven and a half years earlier than those who thought of older people as experienced and wise.

She also determined that those in middle age with no cognitive impairment, but who harbored negative views of aging, went on to develop brain changes associated with Alzheimer’s Disease. The more negative their stereotypes, the more severe the brain changes.

Numerous other studies have confirmed that poor health outcomes are associated with the belief that aging is associated with decline or disability, whereas when we think of aging as a time for continued growth and new possibilities, we become measurably healthier. Participants in studies who had similar health, socioeconomic status, and education levels who had a negative view of aging showed a greater decline in memory, had higher rates of cardiac disease, were less likely to eat a healthy diet and exercise, and had lower odds of recovering from severe illness.

This is a chart taken from a Wall Street Journal article titled “To Age Well, Change How you Feel About Aging”. The data disproves the widely held belief that aging is associated with decline, and shows, in fact, that older adults report a better quality of life than younger adults. Having a negative mindset about aging can be a self-fulfilling prophecy, which is why it’s crucial to raise our consciousness in this regard. 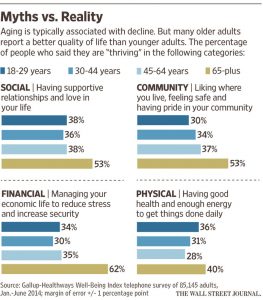 The two factors that are most influential in terms of aging well are not your physical health, but how you feel about aging and the robustness of your social network. It is of course true that there are inevitable painful realities that accompany aging. We lose people we love, and we may no longer be able to do some of the things we valued doing when we were younger,  though we can often still do versions of them that are satisfying. The losses are real, but so are the gains.

Here are two more personal anecdotes, both occurring on the same day last week. I was walking with a friend in the morning who is in her early 50s. The friendly crossing guard asked us, “Are the two of you mother and daughter?” I was shocked that she thought that I was that much older than my friend. This time I was not speechless. I joked, “Yes, she is my mother.” Later on that same day in the afternoon, as I was loading groceries into my car in the Costco parking lot, a perky young woman with pigtails and a flowered print dress who reminded me of a missionary, stopped to ask, “Do you need me to give you a hand?” I was absolutely floored. I was not struggling in the least. I just said, ” Thanks, I am fine.’ Both of these exchanges stunned me and again provided rich opportunities to witness how unwelcome it was to me to be perceived as older. There is clearly more work for me to do in this regard. Inner ageism is not a mindset that can be transcended easily, as it is so deeply ingrained by a lifetime of conditioning and our youth worshipping culture.

In my own spiritual practice, I regularly make use of the Tarot and other oracle card decks to provide guidance and insight. I have recently been working with a gorgeous powerful shamanic deck of cards with images of watercolors paintings with themes drawn from the ancient dwellings and artifacts of the Four Corners area of the USA by southwest artist Jan Wright called “Hands of the Ancients Medicine Cards.”  A few days ago I was reflecting on the fact that the connection with my Guides and Ancestors feels stronger today than it ever has before, and that it seems to have to do with being older.  It was clear to me that the concerns of my former younger self had interfered with my intuitive capacities. I then pulled card #13 “North Direction: Wisdom, Vision, Winter, Old Age.” Yesterday, before  I sat down to write this post, I again pulled a card from the same deck for guidance and got the very same card. This is a picture of it: 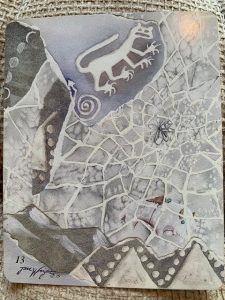 Here is an excerpt from the interpretation that was in reference to aging, “with less stress, we get to a place of “knowing” of sensing other dimensions, and of feeling a closeness to Spirit, in whatever form you believe. As we have more time and as our bodies go through many stages to graying, more aches and pains, and less strength, we often open to more creative expression. Vision and Knowing come more easily”.

I know that this is not true for everyone and that it’s important to avoid generalizations about the experience of aging. but it does describe how I feel.  It’s an essential part of the blessing of aging for me and helps as I wrestle to transcend my culturally conditioned expectation about my capacities becoming diminished with age. It is only by a regular practice of becoming more self-aware, that we can transcend the ingrained internalized negative beliefs that are so inimical to living our most vital creative lives as we age.

On that same day that I was asked if I was my friend’s mother and my encounter with the young woman who offered to help me load my groceries, the podcast ” We Can Do Hard Things” by the author of the book Untamed,   Glennon Doyle, and her sister Amanda, was mentioned twice to me by two different people. The podcast is described as follows:

“On We Can Do Hard Things, my sister Amanda and I will do the only thing I’ve found that has ever made life easier: We will drop the fake and talk honestly about the hard. Each week we will bring our hard to you and we will ask you to bring your hard to us and we will do what we were all meant to do down here: Help each other carry the hard so we can all live a little bit lighter and braver, more free and less alone.”

Two nights ago, the “We Can Do Hard Things” podcast featured a wonderful interview with the visionary pro-aging activist Ashton Applewhite.

Here is a link to the podcast episode and Ashton Applewhite’s 2017 TED talk.

We Can Do Hard Things Podcast Interview with Ashton Appleton.