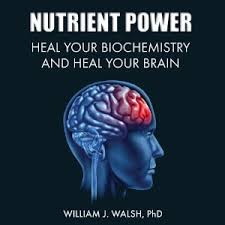 In October of 2014 I attended one of Dr. Walsh’s physician trainings in Chicago on Advanced Nutrient Therapy to treat psychiatric conditions. When I returned to Boston, I ordered simple laboratory studies testing blood and urine for biochemical imbalances on all of my patients. With results in hand, I then created individualized nutrient protocols of nutrients, primarily vitamins and minerals, along with amino and fatty acids for them. Some of my patients have been able to come off of medications entirely and others have been able to decrease their dosages, which reduces side effects. Some people feel better than they have ever felt in their lives!

The Walsh Research Institute has a mission to “bring the benefits of advanced biochemical therapy to millions of persons challenged by ADHD, schizophrenia, bipolar disorder, anxiety, clinical depression, behavior disorders, autism, and neurodegenerative disorders, conduct research studies into a range of mental disorders and train doctors around the world in advanced, drug-free biochemical treatment of these disorders.”

Here is one example of what I admire about Dr. Walsh’s approach to treating psychiatric disorders:

Mainstream psychiatry treats depression as though it were single entity, essentially a serotonin deficiency condition. The first line conventional treatment for depression are medications which inhibit the re-uptake of serotonin (SSRI’s), such as Prozac. It’s essentially one size fits all. Dr. Walsh has a database of 300,000 chemical analyses of blood and 2,800 of urine and has determined that depressed persons can be classified into five major chemical classifications or biotypes. Separate nutrient therapy protocols have been developed for each of the depression biotypes. This classification explains why some people respond well and others terribly to the same medication.

Depressed persons with one of the subtypes characterized by folate deficiency, experience worsening depression and become violent after starting SSRIs. Dr. Walsh stated that there have been about 50 school shootings since the advent of Prozac in 1988, and that 40 of the perpetrators were taking SSRI’s. Dr. Walsh has studied 10,000 violent children and adults, and noted that most of them exhibited troubles before the age of 5. In contrast, the school shooters were pretty good students until about the age of 14 or 15, when they developed anxiety and depression, were started on an SSRI, and then became violent. He believes that this is likely a very nasty effect of SSRIs in some young males with the folate deficiency depression biotype. Given this data, it would make sense to test any everyone for the folate deficiency depression subtype before prescribing an SSRI.

Dr. Walsh contends that it’s simply not possible to eat the amounts of food necessary to correct inherited or acquired biochemical imbalances that are correlated with many psychiatric conditions, though you can exacerbate the condition with the wrong diet. An individualized protocol of nutrients is necessary to correct the imbalance.