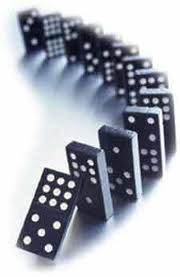 This morning I read an opinion piece in the New York Times by Fred Guterl, the executive editor of Scientific American and the author of “The Fate of Species: Why the Human Race May Cause Its Own Extinction and How We Can Stop It.”

It reminded me of a conversation I had over dinner with an old friend a few weeks ago. I had expressed to her my sense of foreboding about all of the simultaneous unusual weather events that have been occurring with increasing frequency and intensity. On that particular evening in this country there were wildfires burning out of control in huge portions of the Southwest, massive rainstorms had resulted in severe and unprecedented flooding in Florida, a devastating drought was afflicting the midwest, and there were sustained power outages resulting from a “micro storm” in the mid Atlantic states that was combining with a deadly heat wave.

My friend was also concerned, but with much less sense of urgency. She felt that there was no immanent danger, rather it was more of a worry about the world that our children or grandchildren would inherit. In contrast, I have for some time believed that the crisis resulting from climate destabilization is not a distant future scenario, but rather it is happening now, and that this may not be a gradual slow process, but rather one that suddenly unravels due to a sort of domino effect. My fear is that one thing leads to another, in a way that is unforeseen and happens quickly.

“The true gloomsters are scientists who look at climate through the lens of “dynamical systems,” a mathematics that describes things that tend to change suddenly and are difficult to predict. It is the mathematics of the tipping point—the moment at which a “system” that has been changing slowly and predictably will suddenly “flip.” The colloquial example is the straw that breaks that camel’s back. Or you can also think of it as a ship that is stable until it tips too far in one direction and then capsizes. In this view, Earth’s climate is, or could soon be, ready to capsize, causing sudden, perhaps catastrophic, changes. And once it capsizes, it could be next to impossible to right it again.”

Potentially something could possibly still be done about this, but the political will is completely lacking. Just as its is lacking for gun control, with natural consequences like the massacre at the movie theater for the midnight premier of Batman in Aurora, Colorado on Thursday.

The piece that I read this morning elaborated the way in which this could potentially occur. I think it is so important that I am going to include it here in its entirety. If you would like to read a longer more detailed version you can click on this link: Climate Armageddon: How the World’s Weather Could Quickly Run Amok, which is an excerpt from his book, The Fate of the Human Species.

Searching for Clues to Calamity

So far 2012 is on pace to be the hottest year on record. But does this mean that we’ve reached a threshold — a tipping point that signals a climate disaster? For those warning of global warming, it would be tempting to say so. The problem is, no one knows if there is a point at which a climate system shifts abruptly. But some scientists are now bringing mathematical rigor to the tipping-point argument. Their findings give us fresh cause to worry that sudden changes are in our future.

One of them is Marten Scheffer, a biologist at Wageningen University in the Netherlands, who grew up swimming in clear lowland ponds. In the 1980s, many of these ponds turned turbid. The plants would die, algae would cover the surface, and only bottom-feeding fish remained. The cause — fertilizer runoff from nearby farms — was well known, but even after you stopped the runoff, replanted the lilies and restocked the trout, the ponds would stay dark and scummy.

Mr. Scheffer solved this problem with a key insight: the ponds behaved according to a branch of mathematics called “dynamical systems,” which deals with sudden changes. Once you reach a tipping point, it’s very difficult to return things to how they used to be. It’s easy to roll a boulder off a cliff, for instance, but much harder to roll it back. Once the ponds turned turbid, it wasn’t enough to just replant and restock. You had get them back to their original, clear state.

Science is a graveyard of grand principles that fail in the end to explain the real world. So it is all the more surprising that Mr. Scheffer’s idea worked.

By applying the principles of dynamical systems, Mr. Scheffer was able to figure out that to fix the ponds, he had to remove the fish that thrive in the turbid water. They stir up sediment, which blocks sunlight from plants, and eat the zooplankton that keep the water clear. His program of fixing the Netherlands’ ponds and lakes is legendary in ecology.

Mr. Scheffer and other scientists are now trying to identify the early-warning signals for climate that precede abrupt transitions. Tim Lenton, a climate scientist at the University of Exeter in England, has identified a handful of climate systems that could reach tipping points in the not-too-distant future. These are not so much related to global average temperatures — the main metric for climate-change arguments — as they are to patterns of climate that repeat themselves each year.

El Niño is one such pattern — a gigantic blob of warm water that sloshes around in the Pacific Ocean, causing weather changes across wide swaths of the globe. Another is the West African monsoon, which brings rain to the west coast of the continent. Each is subject to behaving like dynamical systems — which means they are prone to “flip” from one state to another, like one of Mr. Scheffer’s ponds, over time periods that vary from a year to a few hundred.

The most frightening prospect that Mr. Lenton has found is the vulnerability of the Indian monsoon. More than a billion people depend on this weather pattern each year for the rain it brings to crops. The monsoon, though, is being affected by two conflicting forces: the buildup of carbon dioxide in the atmosphere is adding energy to the monsoons, making them more powerful. On the other hand, soot from fires and coal plants acts to blocks the sun’s energy, weakening the monsoons.

This opposition creates potential instability and the possibility that the atmospheric dynamics that bring the monsoons could change suddenly. Mr. Lenton’s analysis shows this could occur in a remarkably short time. The monsoons could be here one year, then gone the next year.

Other possible tipping points are the melting of the North Pole’s sea ice, Greenland’s glaciers and the Antarctic ice sheets, and the destruction of the Amazon rain forest and Canada’s boreal forests.

We know that the dynamical-systems idea worked for Mr. Scheffer’s ponds because he achieved real-world results. But why should we believe that the principle explains things like El Niño and the Indian monsoon? The acid test will be whether the real world behaves the way Mr. Lenton says it will. If the Indian monsoon disappears, we’ll know he is right.

What then? The real worst-case scenario would have one such event triggering others, until you have a cascade of weather flips from one end of the planet to another. It wouldn’t be quite as dramatic as Hollywood might want to depict, perhaps, but it would be dramatic enough to rewrite the predictions for sea level and temperature rises that are part of the current consensus. This worst case is highly speculative, but sudden shifts in climate patterns may already be happening.

The policy makers aren’t likely to be discussing dynamical-systems theory anytime soon. Fortunately, scientists like Mr. Scheffer and Mr. Lenton are trying to work out the details of how closely nature hews to these mathematics, what a true tipping point would look like and what we might do if and when we face one.

We need a tipping point in climate politics, where all of a sudden we start paying attention.