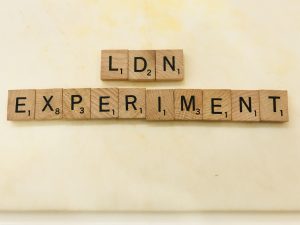 I just returned from Florida where I attended the Annual International Conference 2018 sponsored by the Institute for Functional Medicine entitled, “Solving the Puzzle of Autoimmunity: the Interplay of Gut, Genes and the Environment. “  Though the conference was not officially about psychiatric disorders, I am convinced that most of what was discussed  is directly relevant and applicable to the origin and healing of most psychiatric problems.

The conference was inspiring and I came back enthusiastic to try a variety of new approaches, both on myself and my patients. Fecal Transplants and Helminth Therapy  are high on my list, but fecal matter and worms are still difficult to obtain and complicated to administer. In contrast, another modality, Low Dose Naltrexone , (LDN) a conventional pharmaceutical, is readily available, safe, inexpensive and according to the lecturers, has wide applicability and efficacy.

I have been aware of the existence of Low Dose Naltrexone for some time, but never considered prescribing it to my patients or taking it myself, until I heard the lecture at the conference. Two physicians, Leonard Winestock, MD and Jill Cottel MD, who have extensive experience using it with large numbers of patients, reported that they often had excellent results in terms of achieving improvement and even remission in a wide variety of conditions. There are studies reporting its efficacy not only in classic auto immune illnesses such Ulcerative Colitis, Rheumatoid Arthritis, Multiple Sclerosis and Psoriasis, but also in diverse conditions such as Cancer, Fibromyalgia, Chronic Fatigue, Histamine Intolerance and Mast Cell Activation Disorder, Autism, Chronic Pain and Complex Regional Pain Syndrome, AIDS, PTSD and Depression.

Naltrexone, an opiate antagonist, was developed in 1963. Originally Naltrexone 50 mg three times a day was prescribed to treat opioid addiction and alcoholism. Due to receptor blockade, patients taking Naltrexone would not get high from opioids or alcohol. Unfortunately it was very poorly tolerated by patients. It resulted in dysphoria, as it not only blocked the effects of the intoxicants, but also blocked the naturally occurring endorphins in the body. Patients did not like how it made them feel and refused to take it. Endorphins are naturally occurring substances that create a feeling of well being, such as the euphoria experienced by long distance runners. They also play an important role in modulating the immune response, and in reducing pain and inflammation.

Low Dose Naltrexone is prescribed at doses between 1-4.5 mg, which at that low dose briefly blocks the opioid receptors for a few hours. Subsequently a rebound effect occurs, with increased production of endorphins, resulting in an enhanced feeling of well being, as well as a reduction in pain and inflammation. There are very few side effects. The most common one is vivid dreams, which typically resolves after a few days, but recurs when the dose is increased. Other side effects that have been reported include headaches, GI symptoms and insomnia. But side effects are typically mild and transient, if in fact, any are experienced at all.

Low Dose Naltrexone is contraindicated in patients who are taking pain medications and immune suppressive therapies. It must be obtained from a compounding pharmacy and generally costs less than one dollar a day. I obtained a 90 day supply from Johnson’s Compounding and Wellness in Waltham, MA for $49.95.  Low Dose Naltrexone is available only with a prescription. A couple of days ago, I started myself and a number of my patients on 1.5 mg. I will evaluate in two weeks if the dosage should be increased. It is preferable to take the smallest possible effective dose.

Interestingly, Neil Nathan, MD,  an expert who I often consult when I have patients in my practice with mold toxicity, wrote in a private communication that he never has seen Low Dose Naltrexone work in any auto immune condition. He wrote that it sometimes helps with energy and cognition. Amy Myers, MD the well known integrative physician, also wrote in a post that she has not witnessed dramatic results with her patients. It’s hard to know how to understand these discrepancies. The presenters at the conference reported impressive results in many cases, though not all. I am now taking the medication myself and prescribing it to many of my patients. The risk is low and the potential benefit high.

Not surprisingly, the efficacy of Low Dose Naltrexone is increased by eating an auto immune paleo type diet. It is particularly important to avoid gluten and casein, as they also interact with the opioid receptors. The diet should also include a wide variety of vegetables.

After my first dose, I slept restlessly and had a moderate headache the next day. The next two nights I slept better and had no headache, and had an elevated mood.  I am interested in its capacity to reduce gut permeability and the permeability of the blood brain barrier. Most patients who come to see me have psychiatric symptoms which are caused by a leaky gut, a leaky brain and inflammation.

It is a testament to the potentially high benefit and low risk that a conventional pharmaceutical was featured at a Functional Medicine Conference, and that for many years an organization like the Weston A Price Foundation has also been a strong proponent of its potential benefits.

My thinking is as follows: our current environment is so toxic and stressful, that we need to make use of all possible measures to strengthen our immunity, in order to maintain our health. I am really excited about the potential of Low Dose Naltrexone, and eager to see if it helps me and my patients. I will report back with my findings.