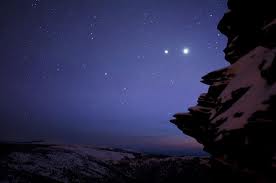 Have you recently noticed two very bright large stars close together soon after sunset in the western sky? These are the two brightest planets, Venus and Jupiter. They approached each other for the past two weeks, then passed one another on March 13, and are now separating, as Venus continues to climb higher in the sky and Jupiter sinks towards the horizon. Last night they were joined by the silver crescent of the new moon, which will be visible tonight and tomorrow. Don’t miss it. It’s totally gorgeous.

Venus and Jupiter will not appear together in a fully dark night sky again until June 2015.  Their orbits are quite different in length; while Venus takes 224 days to make one orbit around the Sun,  it takes Jupiter just under 12 years to do the same, since it circles the sun from much farther away.

Venus, the Queen of the Heavens, shines four times brighter than Jupiter. In western astrology Venus is traditionally associated with love and Jupiter with knowledge. Gary Caton, an astrologer in Asheville, North Carolina, commented that a comparison between the two reflects the fact that  “love trumps knowledge”.

Many modern urban people rarely look up at the stars to experience this incomparable beauty. It is another example of our divorce from nature, which leads to a distortion about who we are, our place in the universe and what are our responsibilities to each other and the planet. Out experience of ourselves is completely out of context.

Astronomer Lucianne Walkowizc in a TED talk titled, “Look Up for a Change”, comments that we are so busy looking at our screens, that we rarely look at each other, let alone the night sky. Light pollution is destroying our access of seeing directly into space. She describes the night sky as a precious natural resource, like a park that we can visit, but that if we do not protect it, it will slip away from us.

There is an organization that protects the night sky, IDA, International Dark-Sky Association, which you can join, if this is a cause that speaks to you.