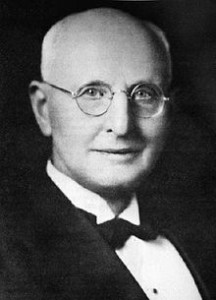 Weston A. Price (1870-1948) was a prominent dentist in Cleveland, Ohio in the 1930’s, who studied the relationship between nutrition, dental health and physical degeneration. Dr. Price travelled around the world for a decade studying traditional peoples of various racial origins whose diets had not yet been contaminated by the influence of Western civilization and what he called the “foods of commerce”, i.e. heavily refined and denatured foods. His book Nutrition and Physical Degeneration distills his research findings and conclusions about what constitutes a diet that promotes health and vitality.

Here is an excerpt from a review of Dr. Price’s book by Niel Rishol

“Perhaps one of the greatest books of the 20th century. Though it was written in the 1930s, it is nonetheless eerily prophetic of the ominous trends that punctuate modern technology, namely the changing nature of how humans and animals eat. There is a “Twilight Zone” sense of foreboding as Dr. Price’s research and findings unfold, chapter after chapter. What this book amounts to is a convincing, virtual warning on what is happening to the planet, and the humans and animals that inhabit it. The information contained within is so compelling, riveting, meticulously documented, and palpably thorough in its research, I have no reservations about saying that this may be the most crucial piece of work on nutrition to ever have been written. But it’s more than a book on nutrition. It deals with the cultural, technological, global, and (latently) political ramifications of manufactured food. There are so many angles – such as soil depletion, corruptive changes in the human form and the catastrophic physical decline of the species – and complications stemming from the changes wrought in the way humans and animals eat, one needs to read the book. There is no guesswork here. Price, like a true scientist, made acutely sure to back up his assertions with chemical analyses, tests and rigorous collection of data.

Price’s findings are amply illustrated with an astonishing collection of photos. The people that pass for humans is plainly frightening. The “before and after” aspect of the hundreds of photos leave the reader in abject shock. There is a real sense of horror, chapter after chapter, of seeing the after-effects of modern foods on various peoples. After reading this book, one may surmise that several factors have fallen into place. That is, the realization of why, despite “advanced” technology, medical care and knowledge, the nation and the world continue to be plagued with disease, degeneration, obesity and ill health. As Dr. Price puts it, the majority of plagues, and infectious diseases have been largely dealt with, but now in its place are degenerative ailments.

The most chilling realization of all is the very real possibility that pre-natal “germ plasm disruptions,” coming from parents who lack the proper means of health through nutrition to create ideal offspring, may be taking place in epidemic numbers. What this is tantamount to is the actual de-evolution of a degenerated human race. Price’s main observation on the healthy primitive peoples is how they respect the laws of nature. What modern technology does not recognize is that many primitive societies have knowledge that have been passed on from millenia in which to base their vital health. What Price does here is to show the effects of “modern foods of commerce” (as he calls it) on these primitive societies. You see, in mind-boggling photos, how healthy, disease-free primitives look; the ones who have been subsisting on their own diets for millenia have beautifully formed faces, palates, jaws and teeth that are totally devoid of caries. Then, there are, among these same peoples where white man and their modern foods have taken over. Children (and the adults they become) with birth defects, deformed palates, rotted, missing teeth and ill-health. Even more scary is the possibilty that “pre-natal disruptions” could cause impaired brain health. Dr. Price very meticulously documents all his findings, which include, specifically, what kinds of foods cause the best health, and, conversely, the worst. He backs up his findings with x-rays, photos and all kinds of data that can’t easily be refuted. The common sense and logic which prevails throughout can’t be shaken off; these details are disturbing and unsettling. We see proof of how nature is being corrupted by an unnatural means of eating. It all falls into place. The untainted foods of God are what we’re meant for. The moral is clear: take the foods of God, alter it, chemically process it, and feed it to people, and witness the catastophic destruction of what nature intended. If this continues, we’re done for.”

Two organizations promote Dr. Price’s important findings regarding the connection between disease and diet. One is The Weston A Price Foundation, whose president, Sally Fallon Morrel, has written a marvelous encyclopedic cookbook/reference book based upon Dr. Price’s work, Nourishing Traditions, based upon Dr. Price’s research. The other organization is the Price-Pottenger Nutrition Foundation. It is a guardian for the archival materials of  Weston Price, DDS  and Frances Pottenger, MD. another seminal pioneer who linked diet and physical degeneration, and which promotes ancestral wisdom regarding nutrition, agriculture and health.