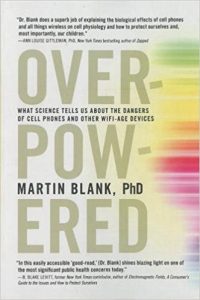 I have wanted to raise the consciousness of my readers regarding the biological impact of electromagnetic radiation  (EMR’s) or electromagnetic frequencies (EMF) on human health and the environment for a long time, but have felt so dismayed by what I have been learning, that I have wanted to avoid it. It is clear to me that our exposure to EMR’s is an unacknowledged public health crisis.  This is yet another very inconvenient truth, just like the devastating impact that our dependence on fossil fuels has on the planet, or the ethical dilemma that the consequence of the mass production of meat is cruelty to animals. It’s overwhelming to accept that our current first world culture and practices are completely unsustainable and damaging not only to the environment, but are seriously degrading our health.

The bulk of what I learned about EMR’s has been via Dr. Martin Blank’s excellent book “Overpowered” , which was published in 2014. Martin Blank, PhD is an expert on the health-related effects of electromagnetic fields and has been studying the subject for over thirty years. He is a scientist with two PhDs, one from Columbia University in physical chemistry and the second from the University of Cambridge in colloid science, and serves as an expert regarding EMR safety for the Canadian Parliament. Everyone should read this very important accessible book to understand the reality and magnitude of this problem, and what we can do about it.

Before reading “Overpowered”, I thought that the problem had to do with cell phones and wireless technology, but now understand that we are adversely impacted by our exposure to all electricity, including common low tech devices such as hairdryers, toasters and electric clocks and blankets. Who knew? ! Some of our exposure is completely unavoidable, such as the exposure we sustain due to the frequencies in our environment from cell phone towers and electric power lines, but there are some simple steps within our control that we can take to reduce the harm. I will list some of them at the end of the post.

Prior to 200 years ago, our only exposure to EMR came from sunlight and other cosmic sources, lightening and geomagnetic forces. ” In 1879 only 250 people owned telephones in all of New York City, just ten years later, dense forests of telephone poles were sprouting eighty and ninety feet tall, bearing up to thirty cross-branches each. Each tree in these electric groves supported up to three hundred wires, obscuring the sun and darkening the avenues below.” (The Invisible Rainbow: A History of Electricity and Life p 75, by environmental activist Arthur Firstenberg.) This is a picture of New York City during a March blizzard in 1888. As you can see from the photo, cities became electrified practically overnight. 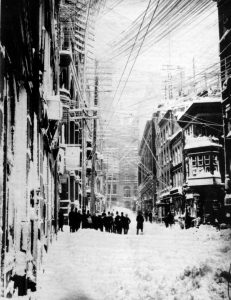 Electricity and our capacity to harness it is the foundation of modern civilization. Just as there was an Iron Age and a Bronze Age, Dr. Blank suggests that we are now living in the Electromagnetic Age. Electricity has enabled all the staggering rapid technological and scientific advancement of the modern era.

The applications of electromagnetic technology, however, has resulted in our ever increasing bombardment and exposure to higher frequencies and dosages of radiation. Humans cannot see, touch, taste, or smell EMR, which understandably contributes to our capacity to deny the risks of exposure. Its effects accrue over time, and are proportional to the duration and intensity of exposure.

Electromagnetic frequencies cause damage to our intricate and delicate DNA and is related to the development of cancers, cardiovascular disease, diabetes, neurodegenerative diseases, infertility, depression and suicide. “Scientists, doctors and researchers have long accepted that ionizing radiation, such as the ultraviolet rays that accompany sunlight, or the X-rays that you are exposed to in your doctor’s or dentist’s office-can harm and destroy DNA. It has been assumed, however, that non-ionizing radiation from power-lines, television broadcasting and cell phones did not harm DNA.” (Overpowered p 51) This is not the case. Non-ionizing radiation can react with and harm DNA which can cause mutations and even cell death and lead directly to serious medical illness.

Just as the tobacco industry suppressed the scientific evidence regarding the hazards of cigarette smoking, there is a profit motivated strategy to manufacture doubt about the negative health effects of wireless technology. There has been a repeated assertion that there is no “proven link”, that the data is inconclusive. “It appears that the response of governments and industry groups to this lack of specific cause and effect relationships between non-thermal exposure to EMF and negative heath effects has been to formulate regulations and safety standards that ignore them completely. While there is plenty of science indicating the presence of significant health risks at non-thermal levels, as far as safety standards and regulatory frameworks are concerned, EMF is harmful to humans only at levels powerful enough to result in increased temperature (the so-called thermal effect). No recognition at all is given to any potential health effects at lower, non-thermal levels of non-ionizing electromagnetic radiation even though non thermal biological effects have been scientifically demonstrated for over a century.” (Overpowered p 161)

Here is a partial list of some of the steps that you can take to reduce your exposure. All of these suggestions are followed by fully elaborated explanations in Overpowered.

I know that these recommendations can feel like an unwelcome hassle. But it’s important. Making even small changes can make a difference cumulatively.

There are two key principles:

Do not live near high voltage power lines.

Stay away from transformers.

Live as far from cell phone antennas as possible

Don’t use electric blankets or waterbeds.

Run extension cords away from furniture and keep cords organized.

Don’t use microwaves, but if you do, get out of the kitchen when the microwave is on

Put your cell phone on airplane mode when not in use

Don’t put your cell phone in your pocket

Laptops are not for laps

Minimize use of hairdryers and electric razors

Consider using an ethernet cable rather than wifi in your home

Turn the wifi router off at night

Switch to plastic eyeglass frames and foam mattresses which do not function as antennas.

Here is a YouTube excerpt of a keynote address given by Dr. Blank:

Since initially posting this a few days ago, it was brought to my attention that Bulletproof Radio’s most recent episode featured an interview with Dr. Joseph Mercola titled “The Real Dangers of Electronic Devices and EMF’s” It’s worth a listen.