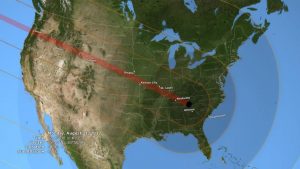 On August 21, 2017 a dramatic celestial event will take place. A total solar eclipse will traverse the United States from coast to coast. It will make landfall in Oregon at 10:15 AM and progressively diagonally cut a 60-70 mile wide swath of darkness across the states until it reaches South Carolina at 2:36 PM. It will be the first total solar eclipse to travel across the entire continental United States in 99 years. The last one occurred on June 8, 1918.

The red line on the map indicates the path of totality, where day will briefly become night, as the Moon precisely aligns between the Sun and the Earth, casting a shadow, and blocking the Sun’s light from reaching us.  The longest amount of total darkness will be 2 minutes and 40 seconds, when it reaches Carbondale, Illinois. Along the periphery, a partial solar eclipse will be visible, extending from Canada to the upper part of South America. The path of totality will then depart off the coast of South Carolina, head out across the Atlantic Ocean, and will not touch land again. Seventy-five minutes later it will disappear into the sea close to Africa.

Solar eclipses are super charged New Moons, signifying new beginnings and are symbols of great change. They have been closely observed and charted by cultures around the world since ancient times, and typically are seen as powerful omens. One of the most common interpretations is that they represent an upending of the established predictable order; day becomes night, disrupting our normal conscious functioning. The residual effects of an eclipse are said to be felt up to six months after its occurrence. 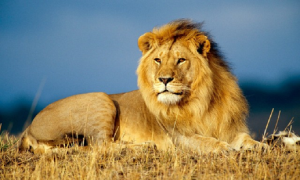 The total solar eclipse of 2017 will occur in the sign of Leo, latin for lion, and is all about courage and heart centered consciousness, meaning that we acknowledge our inextricable connection to one another and to the web of all creation. Leo is associated in its elevated vibration by warmth, joy, generosity, generativity and the very particular legacy that an individual leaves for the future, including her children and creative works.

We are living in a time of impending catastrophic environmental disintegration. We are confronted daily by a steady drumbeat of news reports of record breaking heat, fires raging all over the globe, collapsing polar ice sheets and rising seas, and the massive extinction of species creating a loss of biodiversity not seen since the the era of the extinction of the dinosaurs.

There is desperate and urgent need for us to awaken to the heart centered consciousness symbolized by Leo, and to contribute the unique individual gift of which each of us are capable. There is no time to lose,  and the world needs each of us.

One of Leo’s elevated expressions is the noble good king.

The dark expression of Leo is narcissism, selfishness and vanity, and is associated with authoritarian heartless leadership. In the face of the dire unfolding environmental collapse, our president is attempting to withdraw American support for the global Paris climate accord in the name of “putting America first“, and hopes to enact legislation which would deprive children and the most vulnerable in our society access to health care in order to give tax cuts to the most wealthy.

The 2017 total Solar Eclipse in Leo marks a turning point. Are we going to act with courage, to speak out and do whatever we can to reverse a situation that is jeopardizing the future of our children and future generations, or are we going to passively stand by in helpless passive denial? It’s time now for sacred activism on behalf of planetary healing. Get involved, organize, demonstrate, donate, speak out, vote.

Occasionally I have received comments from readers to the effect that they really like my blog, but I should not spoil it by mixing in politics. The situation in our country is desperate and inimical to holistic health. There is no distinction at this point between the spiritual, the mind, the body, the heart and the political. Our health is being systematically undermined by financially motivated policies benefitting only a small powerful elite with complete disregard for the public good.

May you be moved to embody the highest vibration of the Leo archetype, courage and heart centered consciousness, in the name of the children and the future. Special insights and intuitions about what you can do are most available if you spend time in nature, in prayer and meditation during the time of the eclipse. Here is a link to determine what time the eclipse will occur in your time zone.

I dedicate this post to the Great Mystery and Beauty out of which all things arise, to our connection to one another and to the web of all Creation.

This post was inspired by an article that appeared in the most recent issue of the Mountain Astrologer by eco astrologer Stephanie Austin entitled “What Would Love Do?”