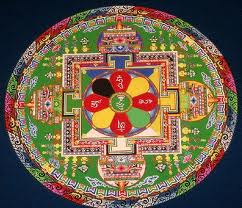 This is a picture of a sand mandala, a traditional Tibetan Buddhist symbol of transience. Tibetan Buddhist monks perform a ritual of meticulously creating beautiful intricate mandalas from colored sand, which they then ceremonially destroy, symbolically representing and reminding us of the doctrinal Buddhist belief that impermanence is the quintessential quality of our lives.

My favorite haunt as a child was the Carnegie Natural History Museum and Library in the Oakland neighborhood of Pittsburgh, known to natives simply as “The Museum”.  It was a few blocks from my parents’ house and by the age of eight I could walk there by myself. In Pittsburgh in the 60’s there was no charge for admission to this world class museum, and I could freely wander amidst the cavernous dinosaur halls, through displays of fossils and dioramas of extinct animals like saber tooth tigers and mastadons en route to the library. The Museum was a dark massive stone complex built in the 1890’s by industrialist and philanthropist Andrew Carnegie. It occupied an entire city block. In those days the stone was still black from the smoke of the steel mills. Carved into the facade above the grand entrances were the words, “Free to the People”.

Twenty five years later, during my psychoanalytic fellowship at the Austen Riggs Center in Stockbridge, Massachusetts,  I worked with an unusual supervisor, Margaret Brenmann-Gibson. She was a provocative outspoken psychologist and peace activist, who was already elderly by the time we met. Margaret Brenman-Gibson told me that if she was in charge of the world, she would decree that the words “Things Change” be carved into the stone facades of all public buildings.”Things Change” instead of “Free to the People” would also have the added merit of actually being true, as The Museum now charges a hefty entrance fee.

One of my father’s favorite quotes was from Goethe’s Faust, “Oh Augenblick verweile doch, du bist so schon.” “Oh moment linger longer, you are so beautiful”. But the moments will not linger longer. Everything is constantly changing, and as much as we wish to hold onto our youth, our health, our children, parents and friends, the way things were, it’s not to be. It is our resistance and denial of this reality that according to the Buddha, is the root cause of our suffering.

The Five Remembrances are the Buddha’s teaching on impermanence, aging, health, change and death. The Vietnamese Monk Thich Nhat Hahn has a lovely version of them that he prescribes to his acolytes to meditate upon daily in order to decrease fear and promote acceptance of reality.

I am of the nature to grow old. There is no way to escape growing old.

I am of the nature to die. There is no way to escape death.

All that is dear to me and everyone I love are of the nature to change. There is no way to escape being separated from them.

My actions are my only true belongings. I cannot escape the consequences of my actions. My actions are the ground upon which I stand.

The recitation of the 5 Remembrances is not intended as a depressing litany, from which the only reasonable conclusion that could be drawn, is that life is a bummer. To the contrary, the purpose is to encourage us to drink deeply of the present moment, to be fully conscious of our experience, that our actions have karmic consequences that we take with us when we die, and to acknowledge that life is inherently hard.

Last night my three teenage children and I ate supper together in the kitchen. The kids were bantering about school, teasing each other, and as I listened I was filled with both gratitude and sadness. I was aware that before I know it, one by one they will go off to college, and this ordinary but precious moment will belong to days gone by, like the dinosaurs, fossils, saber tooth tigers and mastadons at The Museum. I drank in the poignant pleasure of the present moment, of having all three of them with me around the table. My mind turned to the 4th of the 5 Remembrances, and I felt soothed as it connected me to the universal human experience of loss, separation and change.

These days I have been recommending to my patients to develop a meditation practice. Meditation grooms and tones the mind, and increases our capacity to attend to the present moment. Neuroscience is increasingly demonstrating literal physical changes in the brain caused by meditation. The practice of meditation is correlated with decreased anxiety and depression, improved learning, memory, sleep and attention, increased happiness, and capacity for compassion and empathy. People who meditate are less vulnerable to the effects of stress in the environment. They have a greater internal capacity for emotional regulation.

The combination of psychotherapy, meditation, an anti-inflammatory diet, sunlight, simple detoxification measures, sufficient rest, and acceptance of  the 5 Remembrances allow many people to discontinue psychiatric medications or never start taking them in the first place.

Here is a fascinating TED talk by neuroscientist Sara Lazar on how meditation can reshape our brains.